Arka Chattopadhyay:
Beckett, Lacan and the mathematical writing of the Real 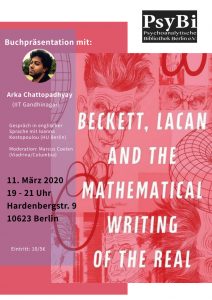 After the Jour Fixe series on Samuel Beckett, Mathematics and Psychoanalysis this winter semester (2019/2020) we discuss with Arka Chattopadhyay his monograph Beckett, Lacan and the Mathematical Writing of the Real (Bloomsbury, 2018).

This lecture will revolve around the question of formalisation both in the literary and the psychoanalytic discourse as a specific tendency within modernism.

Beckett’s late prose texts – such as How It Is or Company – provide the ground, upon which the ways of using mathematical forms in the literary can be observed. Geometry, arithmetic, obsessive counting and combinatorial fury constitute thereby a mathematical writing, which, according to Chattopadhyay, is an attempt to write the Real. The moving, crawling body, a key feature of the exhaustion and the Beckettian aesthetics of failure is here captured towards the notion of the corpo-real, where bodies act like letters and physical movement is an act of writing. It is yet to see, how the Real can be approached and defined the moment a mathematical form stops working or the logic of a text breaks down.

Arka Chattopadhyay is Assistant Professor at the Humanities Faculty in IIT Gandhinagar. 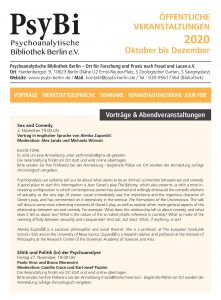 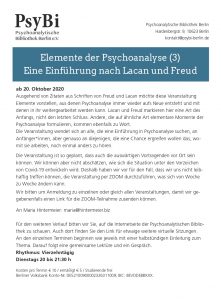